Being Inspired by Local Folklore ...

Over the next few months the Novel Points of View team will be inviting guest writers to the blog. Their brief is to write a post connected to writing, reading, books and creativity. I'm delighted to introduce writer, Sandra Ireland to the blog as she shares how her interest in local folklore inspires her writing.

My new novel The Unmaking of Ellie Rook (Polygon) will hit the shelves on July 11th, and it’s always nice to pause for a moment in the hectic round of promotion to reflect on how it all began! By the time a book is published, you often feel quite divorced from it. After all the editing, proofreading and general tweaking, it becomes a product, and it’s good to have the chance to revisit the inspiration behind it.
Although ‘Ellie Rook’ is a contemporary story about strong women, or more accurately, women in the process of finding their strength, it is rooted in an old legend about a real historical figure who lived not too far from me in the tenth century.  I first heard about the legend of Finella from acclaimed St Cyrus artist Sheila MacFarlane. Sheila works from her boathouse studio in the windswept and beautiful village of Tangleha, just north of St Cyrus, Aberdeenshire. I spent a wonderful afternoon with her, discussing the legend and taking a peek at her work.

The story goes that King Kenneth II executed Finella’s son, and in revenge she set a trap for him at her hunting lodge in Fettercairn. Luring him there to show off her new weapons, she rigged a crossbow to kill the king when he opened the door. Other versions have a more complex set-up, but as soon as the king fell down dead, Finella was forced to run for her life. The king’s men and their hounds chased her through the Howe of the Mearns towards the sea until they came to a 65 foot waterfall in what’s now called the Den of Finella. The lady was forced to make a decision; to stand and be killed or to jump to her death.  I visited the Den for research purposes and the gorge is dizzying. You can’t actually get close to the waterfall now, so I had to use a little artistic license in my novel!

Sheila has captured the strength, earthiness and dignity of this woman in two large wood/linocuts standing almost 2590cm high and 760cm wide. During my visit I was lucky enough to view the prints, one of Finella  standing on a tree stump, and the other of her diving headfirst into the water. She is accompanied in the first image by a black feral cat. The detail is exquisite, portraying not just the female form but the power of bone, sinew and muscle beneath the skin.


Few people have heard of Finella. You might think that her outrageous act and daring flight might have assured her a place in the history books. Macbeth, after all, did something similar just a century later and we all know about that, or rather a version of the truth. I suppose all such historical tales are merely a version of events, which is why we have such a rich strand of folklore and myth in our culture. I’m very proud to have had the opportunity to create my version of Finella’s tale in my new novel. 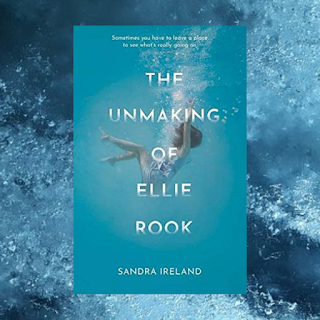 Thank you, Sandra, for joining us on our blog this week and revealing how inspiration can be found in both folklore and other art forms. To find out more about Sandra, her novels and latest releases, plus purchase links,  just read on ...

Sandra Ireland was born in Yorkshire, brought up in Northumberland and lived for many years in Ireland. She’s now based in Carnoustie, the ‘home of golf’, a game she doesn’t play, but a walk around the golf course is the ideal remedy for writer’s block! She is secretary of Angus Writers’ Circle and co-founder of Chasing Time Writing Retreats, now in its third year.
Sandra is the author of three psychological thrillers: Beneath the Skin, Bone Deep and The Unmaking of Ellie Rook, all published by Polygon. A non-fiction title, Grist! The life, lore and  landscape of the Scottish Watermill will be published by Little Toller in the near future.

Author of Beneath the Skin, Bone Deep and The Unmaking of Ellie Rook.
Grist! The Life, Lore & Landscape of the Scottish Watermill coming soon.
Secretary Angus Writers' Circle
One Third of the Chasing Time Retreat Team