HERE’S TO CHANGES by Gill Stewart


This time of year always makes me think of changes (ch-ch-changes - thanks David Bowie). They come to us welcome or unwelcome, planned or taking us completely by surprise: but one thing is sure – come they will. Often, even when they’re not immediately appreciated, they are good for us. They shake us out of a comfortable lethargy and encourage us towards something new and different and (possibly) better. Some people, e.g. me, need these metaphorical kicks in the backside to get us going.

Here are a few changes that I didn’t want to happen and am now really pleased about:

-         The advent of e-books. I said Nooo! I want real books! And I still do, but I love my Kindle for its size, and the fact it allows me easily to try new books I might not otherwise have considered.
-          Divesting myself of possessions when moving house. This was another big Nooo! But it has been very cathartic, plus I’ve found some possessions I’d given up as lost years since, and I’m definitely not letting those go again.
-          Realising that marketing books is an integral part of writing them and getting them read. This is a hard one because marketing does not come naturally to me, but it’s going to be on the list of New Year’s Resolutions I make on Thursday. Well, OK, this might not be a change I welcome, but I’m determined to go for it in 2016.

As some people may have noticed, changes are also afoot for Novel Points of View. We’ll say more about this in the New Year but suffice it to say these are changes I’m very much looking forward to. 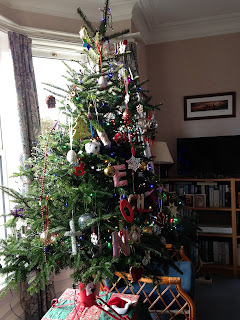 ’Tis the season again. I love Christmas. Sometimes I think I love it too much. I love the mince pies and the sausage rolls and the crispy bacon curling at the side of the Christmas roast. I love the boxes of chocolates lying in brazen temptation on every side table and the tub of Turkish delight that I’d never buy myself but that appears in my stocking without fail on Christmas morning, drowning in icing sugar.

Discipline? You can put that with the scrunched up wrapping paper and bin it.

Okay, so discipline goes out of the window when it comes to food. If only it stopped there; but it doesn’t. The Christmas holidays always deteriorate into a lazy festival of slowing about on the couch with a glass at your elbow and the telly on. Worst of all, creative discipline sinks under the weight of universal sloth. There is a risk that as a writer you may not write.

That’s certainly the case for me. I’m normally highly disciplined and extremely productive, even if I do say so myself; but somehow the sugar (all right, the wine) has a soporific effect. There has to be an answer.

I think I have it. This year I’m toying with the idea of what I call a literary offset scheme. A body has to eat, of course, and it’s okay to eat a little more at Christmas. But a lot more? Three hazelnut whirls from that open tin of Roses? Of course I don’t really need them — but I want them. And I can have them. But it’ll cost me.

A glass of wine and a sausage roll? Let’s call that 300 calories (ahem). And I won’t stop at one because I never do, so let’s double up. Reader, if I want that seasonal treat, I’m going to have to write 600 words to match my 600 calories. Who’s with me?

HAVE I MISSED A CHRISTMAS (NOVEL) TRICK? By Linda Mitchelmore

A couple of Sundays ago I was in my lovely, local, independent bookshop for their Christmas Event. (Okay, I was there as part of the event, signing copies of the third in my 'Emma' Choc Lit trilogy - but that's another story) Wandering around, as one is wont to do in a bookshop, I noticed a large display of Christmas-themed novels. And all in paperback I'm pleased to say. There were some big names in the display of books. Carole Matthews, whose Christmas novel, The Chocolate Lovers' Christmas, weaves a tale of an ex-fiance turning up, and girlie friendship tested to the limit over the festive season. Judy Astley's, A Merry Mistletoe Wedding, is a tale of will it, won't it go ahead? Not on that table but another big name writer with a Christmas novel out is Trisha Ashley with her, A Christmas Cracker, in which Merry - totally down on her luck - teams up with Mercy and together they save Marwood's Magical Christmas Crackers. Both Carole Matthews and Trisha Ashley have been in the top paperback bestsellers on various lists. 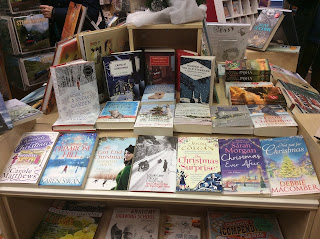 And, of course, as well as paperbacks there are numerous ebooks out for Christmas. My own publisher, Choc Lit, has published Jane Lovering's fabulously funny. feel good, Christmas story, The Art of Christmas. So, have I missed a trick? Ought I to have jumped on this bandwagon and produced at the very least a novella that people can curl up with by a log fire, a glass of something festive to hand? 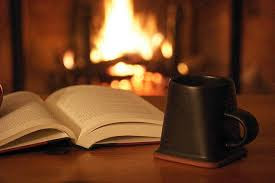 Possibly, But I'm left with the question 'Who the heck has time to read a novel over the Christmas holiday?' Not me, that's for sure. I'm lucky if, in between peeling sprouts and pouring drinks, making coffee to cure thick heads and playing fantasy games with my grandchildren, I get a chance to look at the TV listings. Which leads me to the question, 'Did Charles Dickens start the idea of Christmas-themed novels when he penned, A Christmas Carol?' If I'm honest I'm a bit Bah Humbug about Christmas. I don't know that I could muster up comedy romance themes, or a Christmas in an exotic location. But hey.....maybe I could write one after all on the Bah Humbug theme? I've got a whole year now to do it in, haven;t I? HAPPY CHRISTMAS, EVERYONE.
Posted by Linda Mitchelmore at 12/14/2015 10:41:00 am 12 comments:

Are you a grammar snob? Do you know and obey all the rules (avoid the passive tense, avoid adjectives and adverbs …) Or do you believe that as long as a sentence is understandable that’s fine?


Are you a grammar snob? Do you know and obey all the rules (avoid the passive tense, avoid adjectives and adverbs …) Or do you believe that as long as a sentence is understandable that’s fine?

I lie somewhere in between the two extremes, and I would never have claimed to put particular value on style in writing. But (for a little light reading, while away on holiday) I’ve been reading Steven Pinker’s  ‘The Sense Of Style’. And because he writes so clearly and with such style I now see how important good style is.

I’ve always said I’m not a fan of literary fiction. I don’t like convoluted phrasing or books that are about ideas and not people. Now I’m starting to think that it is only bad literary fiction that I don’t like. Just as I’m not a fan of bad light fiction. In fact, I don’t like poor quality writing in any genre. Now that Pinker has explained it to me, I see that I am, in fact, a great fan of good writing, what he calls ‘classic style’. Classic style is about communicating clearly and concisely between writer and reader. ‘Classic writing, with its assumption of equality between the writer and the reader, makes the reader feel like a genius. Bad writing makes the reader feel like a dunce.’ ‘Good style isn’t about rules, it’s about empathy, coherence and adding beauty to the world.’ Makes sense, doesn’t it?

Pinker’s book isn’t only informative, it’s amusing too. I love the idea of ‘zombie nouns’ – nouns made out of verbs and which are almost always less clear and take longer to understand than the original verb. Compare the two phrases: ‘Comprehension is a necessary part of analysis’ and ‘It’s important you understand before you analyse’. The first one has the zombie nouns.

A key piece of advice from Pinker is that nobody writes brilliantly first time. The key to good style is good editing. It takes work, but with effort we can all write better. So that’s going to be one of my New Year’s Resolutions – to edit more and write more clearly. How about you?

And yes, I am really worried I have made lots of style errors in this blog. Please feel free to point them out!