Gosh, after Linda's exciting post last week, I don't really know what to say! It's always great to hear about successes. I met Linda first on a writing course in Corfu some years ago, with Katie Fforde. We had a lot of laughs (and there remain a few stories to tell), but most important of all, we formed a friendship that has lasted.
I'm sure that writing was once a solitary occupation. Of course, it still is, because you create a world in your head, peopled by characters that only you know and can describe - and that's what's so magical about writing. You are in control of this world and only you can bring it to life and call upon others to enter your creation. There's a weird feeling of power - yes, you can create people or kill them off, set their houses on fire, make them fall in love - or out of it - save a village, destroy a planet. But with power comes responsibility. You have to bring your readers with you on the journey of your imagination. You have to make your characters true to themselves and real. You have to lay clues on the first page that tease the reader into wanting to know what dangers or challenges your characters face, and you have to make sure those clues are all unwound, unravelled and explained by the end, or you will leave your readers feeling unsatisfied. It's an activity that fills your whole head and is at the same time utterly fulfilling and totally challenging.
Anyway, I was talking about writing being solitary. Maybe it is when you're at the keyboard, slogging away at your creation, but the truth is, it's not solitary any more. I have made some wonderful friends through my writing. I have found that well established writers like Anita Burgh, Katie Fforde and Eileen Ramsay have been extraordinarily generous with their time and expertise, not just to me, but also to other dedicated aspiring writers. I've joined e-loops (writersscotland members have become both a support and a delight, my Annie Burgh friends are a joy, as are my FAWers) and I've established a small but perfectly formed buddy group locally (thanks, Numpties!).
There's my friends on Novel Points of View, too. We're all different, but we all understand the craft of writing, the joys it brings and the toll it takes.
And of course, there's a whole world out there in the shape of my Twitter and Facebook friends.
Solitary? Not any longer. Being a writer you become a part of a great, supportive, frenetic, funny, witty, erudite, emotion-filled community.
Just give me time to write!
Posted by Jenny Harper at 5/27/2012 10:31:00 pm 13 comments:

UP IN THE BIG SMOKE - LINDA'S MEMOIR

Well, you pay your subscription - in this case to The Romantic Novelists' Association New Writers' Scheme. And you bide your time. And you hone your craft. And you learn to take rejection on the chin. And you never give up.
And then one day, your moment in the sun has come and you find yourself enjoying a proper, posh, afternoon tea with linen napkins and dinky French pastries and cucumber sandwiches along with fellow writer friends at the start of a day of celebration. Well fed, you retire to your room for a teensy snooze and then a shower before climbing into your gladrags for the evening because this is your moment - you find yourself in the line-up for the New Writers' Scheme Joan Hessayon Award, along with eight others hopeful of taking home the big cash prize and the trophy. If you're like me - it seems a miracle that you're there at all.
So it was for me on the 17th May 2012 in the rather grand venue of The Royal Overseas League, India and Pakistan Hall....or something like that....I'd had a glass of wine by then to still my nerves so exact details elude me now.
I've been to a few of these 'dos' now and never was the frock and the shoes and the make-up so important!
Oh yes, the shoes.....RNA members and their shoes are legendary! And there were some stunning pairs there for the 2012 awards.
I have to be honest here and say that when I joined the NWS I didn't even realise there was a prize....I thought it was merely a process to becoming a published romantic novelist......however long that process took!
I didn't win the big prize on Thursday night and I didn't come away with the shiny trophy but I did come away with an Award Certificate and £50 which I intend to spend on perfume because, well, perfume seems such a frivolity in a recession and we all need frivolity sometimes and now I have the wherewithal to have some.
My book, TO TURN FULL CIRCLE, is published by Choc Lit and.....banners out here, please, lots of flag waving.....it was a Choc Lit writer, Evonne Wareham, who did go home with the big prize and the shiny trophy for her novel NEVER COMING HOME.
Lots of whoops of joy from the other (including me) Choc Lit authors in the room.
A lovely start to the evening.
But that wasn't all.....the prize for Romantic Novel of the Year went to Jane Lovering - another Choc Lit author - for PLEASE DON'T STOP THE MUSIC.
I felt I'd won both awards by association...and that's the truth.
The champagne was still flowing, The Royal Overseas League provided the best nibbles I've ever had at an event like this and the room was packed with happy chatter.
But 9 p.m. - and chucking out time - came and so we all bundled ourselves into taxis  - some to eat in swanky restaurants, some to a bar somewhere, some to trains or cars and the journey home. I - along with my daughter and some RNA friends - made my back to The New Cavendish Club and my bed for the night....but before that a little more wine to celebrate being part of the Choc Lit family and a fantastic evening.
And it didn't end there! The next day, Choc Lit invited their writers to lunch and so I made my way to Pizza Express in a taxi by an extrememly roundabout route as half of London seemed to be blocked off in readiness for the Olympics.
At Pizza Express more champagne flowed and Margaret James, my daugher, and I decided it would be a good idea to help it (and the delicious lunches we had eaten) dissipate by walking back to The New Cavendish Club. The New Cavendish Club is a home from home now so after our long walk back we kicked off our shoes and collapsed into comfy couches and ordered tea while we waited until it was time to walk to Paddington and our train.
Now, train journeys can be tedious and boring and you can end up sitting by people you wish you didn't have to sit by but that wasn't how it was for me......complete with helium-filled star and heart balloons I have to add here. All around us were in happy spirits....the journey sped by.
Journey's end.....or is it? I have a sequel to write....and then the third in the trilogy.....better get on, hadn't I??

Below
Evonne Wareham with her shiny trophy.
Jane Lovering with a well-deserved grin giving her speech of thanks. 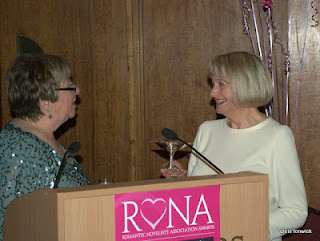 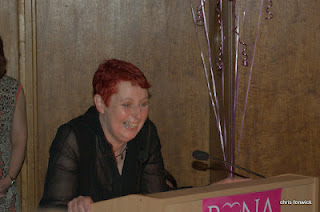 Another novel in my Home Series

Another Home – Another Love is the fourth novel in the Home series, which started with Dreams of Home when Steven Caraford was a young man returning from the war, desperate to start farming and be able to marry the girl he loves. It is followed by A Home of Our Own and Heart of the Home following his progress and that of his relations and friends.
Another Home- Another Love moves on to the next generation with their different problems to overcome.

All my novels have a Scottish farming background and I am wary of becoming repetitive and boring readers with farming details so I am continually searching for a new angle or development. In this fourth novel I have moved slightly to include some market gardening. This, and a different publisher, are responsible for the change in the style of the book jacket.


Another Home - Another Love (blurb from cover)
Rosemary Palmer-Farr loves farming and animals and has spent much of her childhood at Bengairney Farm with her dearest friends, the Carafords. Now, as a young woman, she wants to prove herself a good business woman by running the gardens of her father's dwindling estate. Her mother, Catherine, is not impressed and wants her to make a good marriage. She looks down on the Carafords because they are only tenant farmers.

When childhood friendship deepens into love Catherine takes action and extracts a promise from Sam Caraford, calculated to keep them apart, even if it costs their happiness. She throws Rosemary into the company of eligible young gentlemen but Rosemary despises their attitudes and yearns for Sam's love.

As I was driving into town yesterday evening, I noticed a young couple, 16 or 17 years of age, walking along the pavement.  The girl made no impression on me.  But the boy, leaning in towards her, chin out, eyes wide with laughter as he chatted eagerly – he caught my eye.  And I thought yes, I can use him!  Which sounds bad, but we have to admit it, as writers we do ‘use’ people.

I don’t know who the boy was and am not sure I would even recognise him if I saw him again, but he is captured in my mind’s eye as a possible character, even a hero, for the future.  There was something about his mannerisms, his clear young feature, his enthusiasm that caught my imagination.  That’s all it takes, that one little spark, and the writer in me is away – at this stage he doesn’t have a name or any of the other details that will become so important but I have the essence of him, and that’s what I need to carry the spark of the story.

This reminded me of what Linda wrote last month in her musings on heroes - http://novelpointsofview.blogspot.co.uk/2012/04/linda-ponders-heroes.html
They are vital to any romance and therefore also crucial for us as the story tellers - they carry our enthusiasm, engage us in a way that makes it possible to engage our readers – or so we hope. And we can find them anywhere - while watching television, flicking through a magazine, or driving down a street.

I don’t have a ‘visual’ I can share, a picture of this young boy who may feature in a future Young Adult novel.  Half of me wishes I could have stopped the car, leapt out and taken a picture with my phone.  But we can’t do that.  Can we?  At least, I didn’t, so I’ll leave you with a few photos of people who may also put in an appearance in a future book.  I doubt anyone will recognise them if they do, but their ‘essence’ will be there for me.  They might not work for you, but that doesn’t matter.  As long as I can use them, as long as they work when they are down on the written page – that’s what matters about a hero.

Mmm, wonder if I’m seeing a theme here.  They all seem to be footballers.  Maybe my next novel can involve professional football and I can indulge in the total immersion type of research as discussed by my friend Janice Horton in her current blog http://janicehortonwriter.blogspot.co.uk/