TO SWEAR OR NOT TO SWEAR – THAT IS THE QUESTION

Warning: if you are of a sensitive disposition and rude words upset you, please don’t read this blog post. It is about swearing in novels, and therefore contains some ‘naughty’ words by necessity, to illustrate my points.

I write dual timeline fiction, where a historical mystery is uncovered and resolved in the present day. My books do reasonably well and get mostly good reviews, but I have had a couple of reviews complaining about the ‘bad language’ and recently was contacted via my website by someone who was so shocked at the swear words in chapter 1 of The Drowned Village that she found it hard to read on. 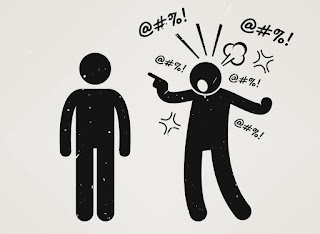 And yet, I don’t feel that I overuse swear words. It’s possible that I’m immune to them – I am married to an Irishman who uses swear words, particularly what one reviewer coyly described as ‘the F bomb’ practically as punctuation.

But I do have my characters swear if I think that’s what they would naturally do, in the situation I’ve put them in.

Here’s an example from The Pearl Locket (it’s not a spoiler). Context is that our hero Jack is fighting in 1944 in northern France, just after D-Day.

The mortar and bag of shells was there, but no Mikey. Only a smear of blood along the bottom of the ditch. ‘Shit, Mikey, what’s happened?’ Jack muttered. He followed the trail of blood a few yards further along the ditch, and found Mikey, lying on his back, clutching at wounds in his thigh and side.
‘Mikey, oh Christ, Mikey. Hang on, kid. I’ll soon patch you up.’ The thigh wound was pumping blood. Jack pulled out his knife and cut off the lower part of Mikey’s trouser leg. He tore a strip of it and tied it tightly above the leg wound, wadding the rest against the hole in Mikey’s side. He placed Mikey’s hand over this. ‘Push hard. Keep the pressure on. I’ll get you home.’
‘Never coming home,’ Mikey mumbled.
‘Yes you are, kid. You’re not fighting any more with those injuries. We’ll have you back on a boat in no time. Shit!’ Jack ducked as more machine gun fire rattled across the field. He felt the whoosh of a bullet right past the side of his head. ‘Too close. Mikey, look, I’ve got to get that mortar set up. We’ve no hope unless I can take out the machine gun. Keep that pressure on, and hang on in there.’

So, just two instances of ‘shit’ which given that Jack’s best mate has been mortally wounded and he himself is being fired at, does not seem excessive to me. I mean, you would swear in that situation, wouldn’t you?

And in the same novel, in the contemporary story, teenage Matt has just been dumped by his girlfriend Kelly.
Matt knocked the tray out of her hands. Crockery and leftover food went flying and a couple of girls at the next table leapt up squealing as they were showered with debris. ‘For fuck’s sake, Kelly. We’ve been together nearly a year and you do this to me? Well, that’s it. I’ve had enough. It’s over. Over! Happy now?’ He stormed out of the café.
Much later, Kelly turns up at Matt’s door, unannounced.
‘… It’s a long story. Can I just get rid of the taxi? Then I’ll explain. If it’s OK to come in… Thing is, I can’t go home, and I’ve no money and no phone…’
‘For fuck’s sake, Kelly.’ Matt dug in his pocket and pulled out a two-pound coin. He thrust it at her then turned and walked back into the house, leaving the front door open.

Matt’s use of ‘for fuck’s sake’ in these clips is part of how he speaks, as a modern day teenager who is being mucked about by his girlfriend. I think it’s warranted and natural. And these extracts are the only swearing in that entire novel.

The one that elicited the contact via my blog is this. It’s in chapter one of The Drowned Village, in an extended flashback. Laura has returned unexpectedly early to the flat she shares with her long-term boyfriend and best friend who is their lodger. She’s walked in on the two of them humping, and Stuart has admitted it’s been going on for some time. And then he says this:
‘Lols? I guess maybe you and Martine should swap rooms. I mean, now it’s all out in the open . . .’ Stuart said, with a shrug.

That did it. ‘Swap rooms? You think you just move me into the spare room now you’re bored of me, and Martine into our room? It’s as easy as that? You bastard, Stuart. You are a complete and utter GIT! And you –’ Laura turned to Martine – ‘how even could you? I thought you were my friend. My best friend. Well, fuck you.’ She picked up the nearest object to hand – a ring-binder folder of Stuart’s containing details of his work projects – and flung it across the room at them both. Satisfyingly, it popped open in mid-air, showering papers everywhere.


Again, in that situation, you would swear, wouldn’t you? I mean, ‘blimey’ or ‘you cad’ just wouldn’t cut the mustard, would it? 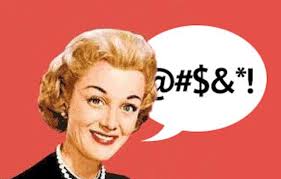 I like swear words. I like the impact they bring, in those heated moments, when you need to show the extreme emotions your characters are experiencing. I don’t use them lightly – I use them when no other word will do.

What do blog readers think? To swear or not to swear, in fiction? Does it bother you or not?

Email ThisBlogThis!Share to TwitterShare to FacebookShare to Pinterest
Labels: swearing